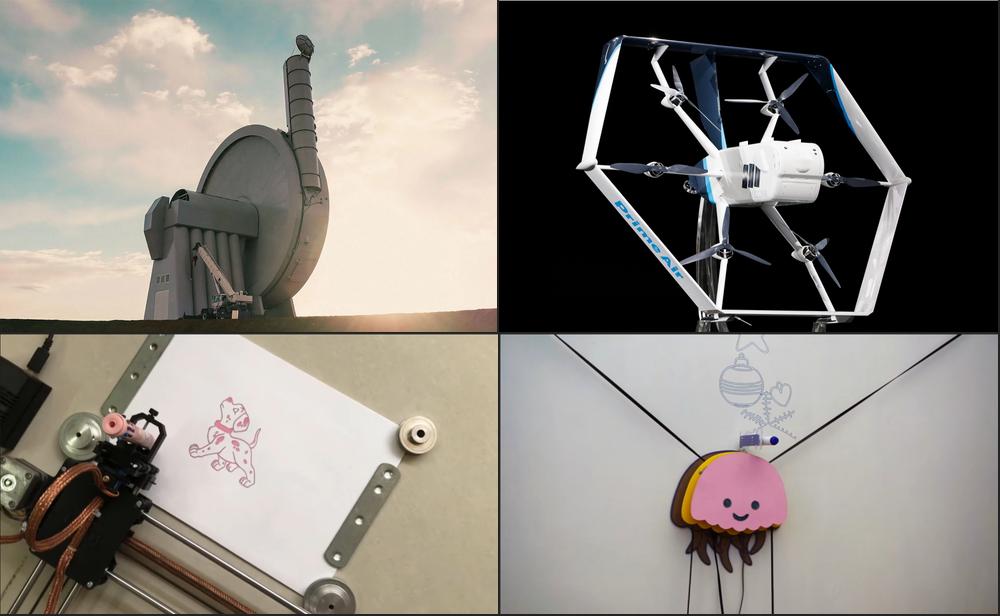 Today, I’m entering a very busy period, and my time to work on the newsletter will be a bit more limited than usual (you will still receive your weekly dose of robotics every Monday). If you would like to help out by sending me some cool robotics-related projects/news/research that would be superb and I would really appreciate that! If you add your name and social handle or Github link then I will be able to properly credit you too. As usual, the publication of the week section is manned by Rodrigo. The most clicked link last week was the open-source lawnmower with 14.1% opens.

Last year we’ve featured Wired article on some issues in the UK team of Prime Air. Today’s feature is a Bloomberg investigation into some of the issues the team is still facing, such as inefficiency (team members winding motors by hand) or even some safety features of the multirotors not working properly when needed. On one occasion the drone had a motor issue, causing it to flip upside-down and dropped 160 feet, causing a fire.

If you’ve worked with mapping/localization or integrated a GNSS in ROS then you probably know REP-105 and you probably expect a system like a mobile robot to have a TF tree as map->odom->base_link. The in-depth discussion above is about changing the approach to map->base_link<-odom (notice that base_link has two parent frames in this configuration). There is a lot to learn from this discussion, so I highly recommend it!

Recently, there were two plotting robots featured in Hackaday that I found interesting.

This wall drawing robot looks like a jellyfish and is cable-driven. The design allows for drawing on a canvas with a size of 5x3 meters.

This multicolor drawbot is a more traditional plotter design that uses a multicolor pen. From the video, it looks like this robot supports A4 page size.

NASA Will Test SpinLaunch’s Ability to Fling Satellites into Orbit

Do you know what sounds pretty cool? Launching stuff into space by using a ginormous centrifuge does. Later this year, NASA will give SpinLaunch system a spin (sorry, I could not resist the pun). SpinLaunch’s plan is to have a centrifuge provide an initial speed of 5,000 mph (8,047 km/h) by spinning a payload so fast that it will be under 10,000 G of force. Because of this, the systems being launched will have to be heavily ruggedized. The system will still require the payload to be launched with a second stage rocket to reach the orbit but thanks to this design 70% of fuel costs will be saved. Personally, I’m curious how difficult it will be to time the release of the payload, as I imagine a few millisecond delay in the release will cause a rocket full of propellant to crash into a wall of your super-expensive centrifuge.

Microsoft had released a Visual Studio Code extension for embedded development that adds code inspection, an option to build/deploy/debug to the device, breakpoints, RTOS object views and more.

Watch a Cruise Robotaxi Get Pulled over by SF Police

If you haven’t seen this yet, here is the video of the incident that you can actually view in your browser. The officers seem quite confused about the situation, and I would not blame them because what do you do in this situation? According to this document by Cruise there is a phone line that can be used, otherwise, you have to rely on the two-way communications link inside of the vehicle.

Most LiDARs come with an evenly distributed bean configuration, however, beams at different positions might be beneficial for specific kinds of applications. This paper presents a framework to optimize the bean configuration for low-resolution LiDARs in order to increase performance for 3D object detections and localization. For the 3D object detection, the method converges the beams to where most of the objects are, different from the localization where the beams get evenly distributed and concentrate on static objects. Dynamic reprogrammable LiDARs can play a tremendous role in higher levels of autonomy in the future.

“Austin-based robotic automation company, Diligent Robotics, today announced that it has closed over $30 million in Series B funding, bringing the total investment raised to date to nearly $50 million. Diligent Robotics develops socially-intelligent service robots and artificial intelligence solutions that enable robots to collaborate within and adapt to human environments”. If you would like to learn more about Diligent Robotics, then Robohub released this interview with Andrea Thomaz, co-founder of the company.

“Built Robotics raised $64 million in Series C funding. The company had been quietly growing its customer base and developing its product since its last funding round in 2019, but was approached by the lead investor in the round, Tiger Global, to raise additional capital”.