Robotics in 2022 - the most interesting applications, research and DIY projects 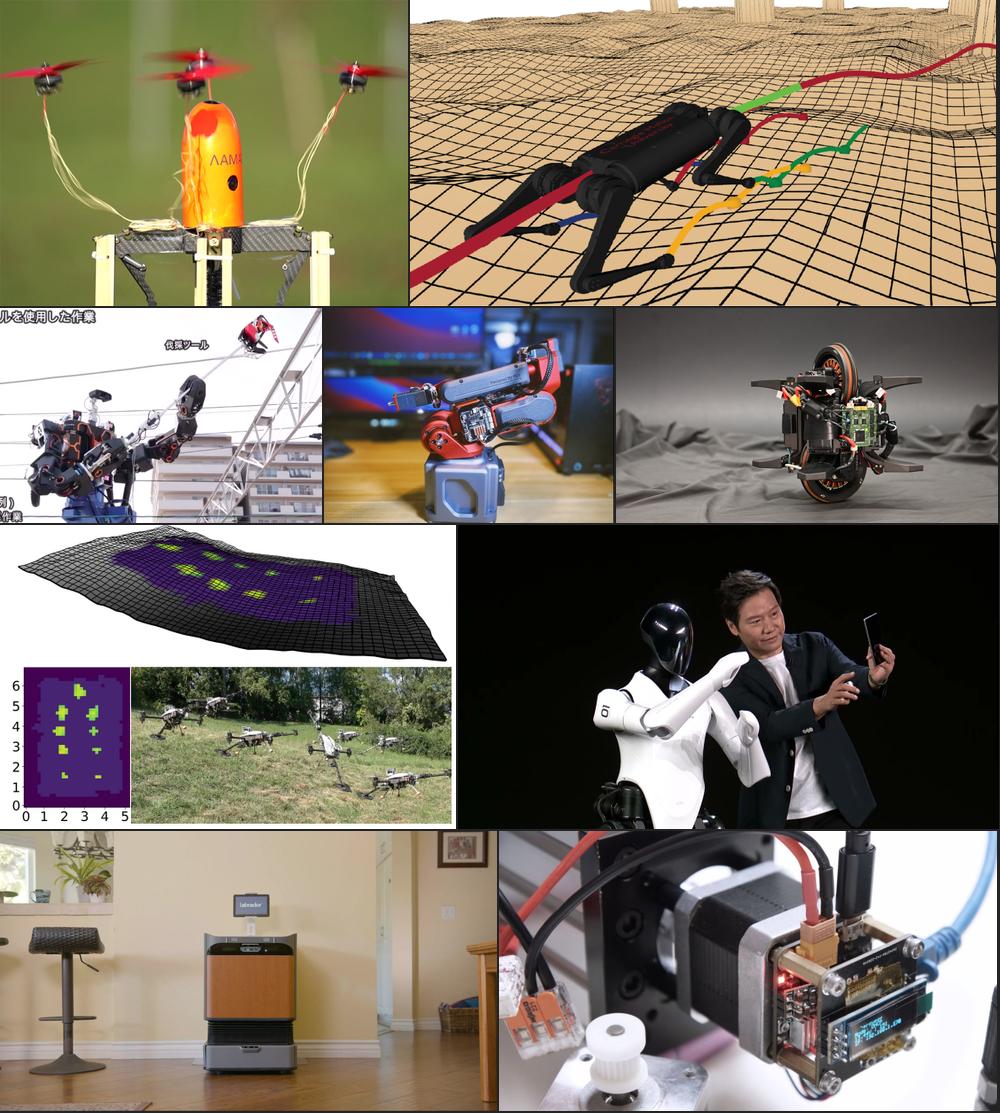 The article in front of you is a subjective selection of the most exciting robotics projects and news that made it to the Weekly Robotics in 2022. If you are interested in this kind of summary, check my coverage of robotics for 2021, 2020, and 2018. 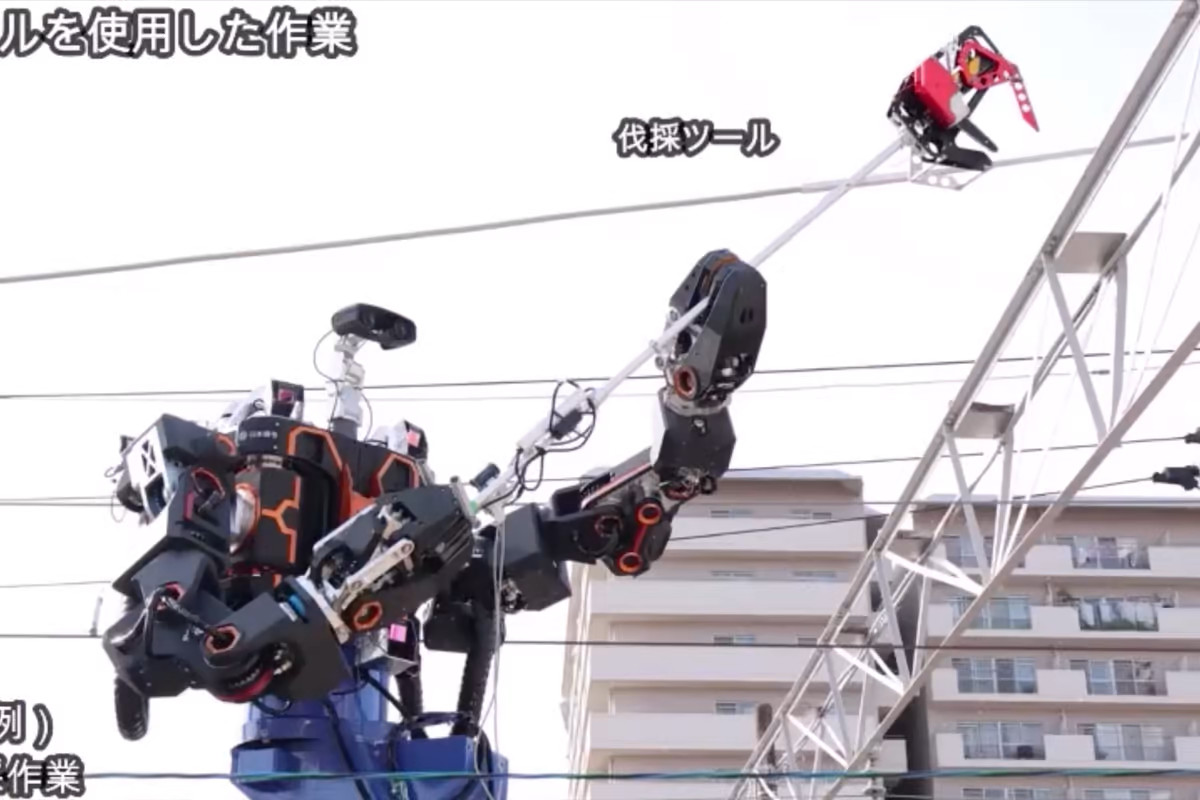 This robot torso is mounted on a crane and can be teleoperated to maintain railway infrastructure, saving humans from getting anywhere near the high-voltage lines.

The new humanoids in town

In 2022, we had two reveals of humanoids that gathered some media attention. The first was Xiaomi’s CyberOne, and the second was Tesla’s Optimus. The two reveals were OK. We didn’t see anything ground shuttering from any of the designs, but let’s give the companies some more time to polish their builds and find some applications.

In this video, Asianometry shows the history and the technical difficulties faced by nuclear-decommissioning robots deployed at Fukushima.

Zipline is working on an awareness system for their delivery drones that could help detect other aircraft without a transponder. For all the technical details about this work, check out this talk by Gavin Ananda.

Rovers Heading to the Moon in the 2020s

Jatan Mehta of Jatan’s Space newsletter created an excellent write-up on the rovers heading to the Moon this decade. Things are going to get busy!

This robot by Labrador Systems was a breath of fresh air in the consumer robotics space in 2022. The robots seem simple, focusing on solving a single problem: helping the physically impaired move things around.

Wheelbot is an exciting balancing robot that is compact and embeds four IMUs.

This video shows the University of Washington’s off-road autonomous Polaris, funded by DARPA’s RACER program. According to the description, the team uses only on-board sensors and not GPS or predefined maps for localization. Watching the footage, it indeed seems like a full-speed or nothing approach with some excellent music that fits the mood. 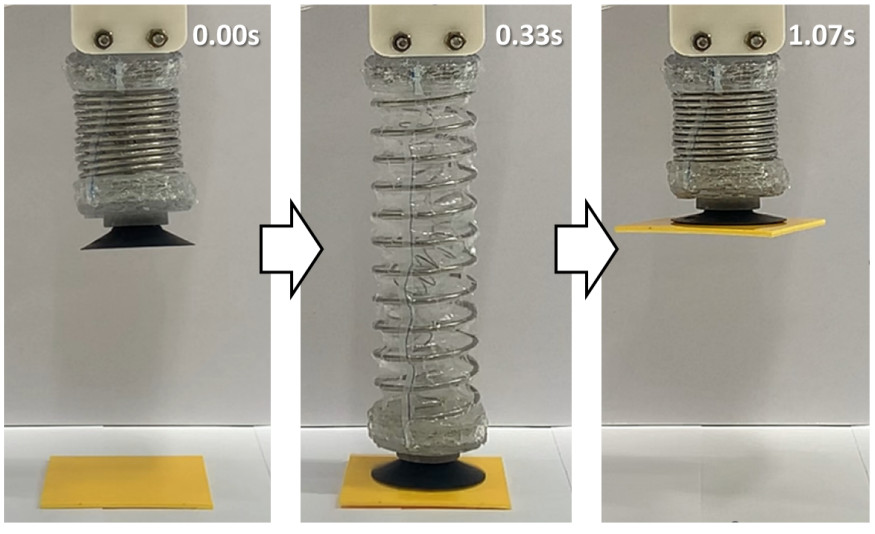 Researchers from Seoul National University came up with an exciting suction gripper design that consists of an air tube with two embedded springs and a 3-way valve. The flexible design allows for picking up objects at various distances and orientations. The tests performed in the paper check the separation of up to 147.5 mm and up to 60 degrees tilt angle. 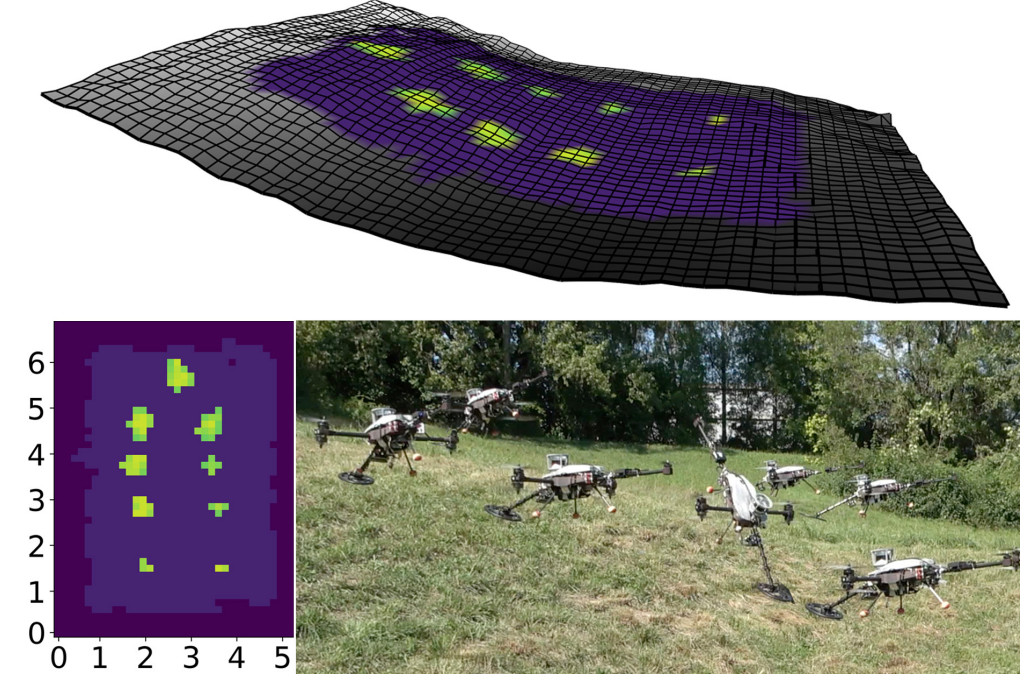 Researchers from the Autonomous Systems Lab at ETH Zurich equipped a Drone with a metal detector. The drone can rotate its body in a pitch direction, ensuring the sensor is parallel to the ground. The multirotor is equipped with a LiDAR and RTK GNSS that allows it to localize and detect the ground.

Although we’ve seen racing multirotors outracing humans before, this race was unique because the system did the localization and vision system on-board. According to the article, the multirotor beat the top human competitors by 0.5 seconds in a three-lap race.

Jet HR-2 is a bipedal robot developed by researchers from the School of Automation, Guangdong University of Technology. The robot weighs 17kg, and ducted fans allow it to perform a stable hover. You will find more information about this design in this paper. Will this work turn into the first toddler-scale Iron Man suit?

This Guitar Playing robot manipulator from Georgia Tech differs from the alternative approaches in that it uses a single pick and collaborates with a human to play a song. The Center for Music Technology website is a lovely rabbit hole to fall into if you like combining art and technology. Writing this, I’ve spent half an hour watching the Guthman Musical Instruments Competition 2022 Finalists.

This article, with an embedded video, describes the work done by Adam Bäckström in modifying an off-the-shelf hobbyist micro servo by adding an encoder to make a very precise and cheap robot arm.

“Ethersweep is a small PCB stack that sits on the rear of the common NEMA17-format stepper motor. The only physical connectivity, beside the motor, are ethernet and a power supply via the user friendly XT30 connector. The system can be closed loop, with both an end-stop input as well as an on-board AMS AS5600 magnetic rotary encoder”. You can find more information about this project on GitHub.

I fell in love with this haptic knob by Scott Bezek. The knob is built using a BLDC motor with a hollow shaft and a round LCD screen. The knob has configurable end stops, virtual detents, and haptic feedback. This video shows how this knob was built and explains its technical details. 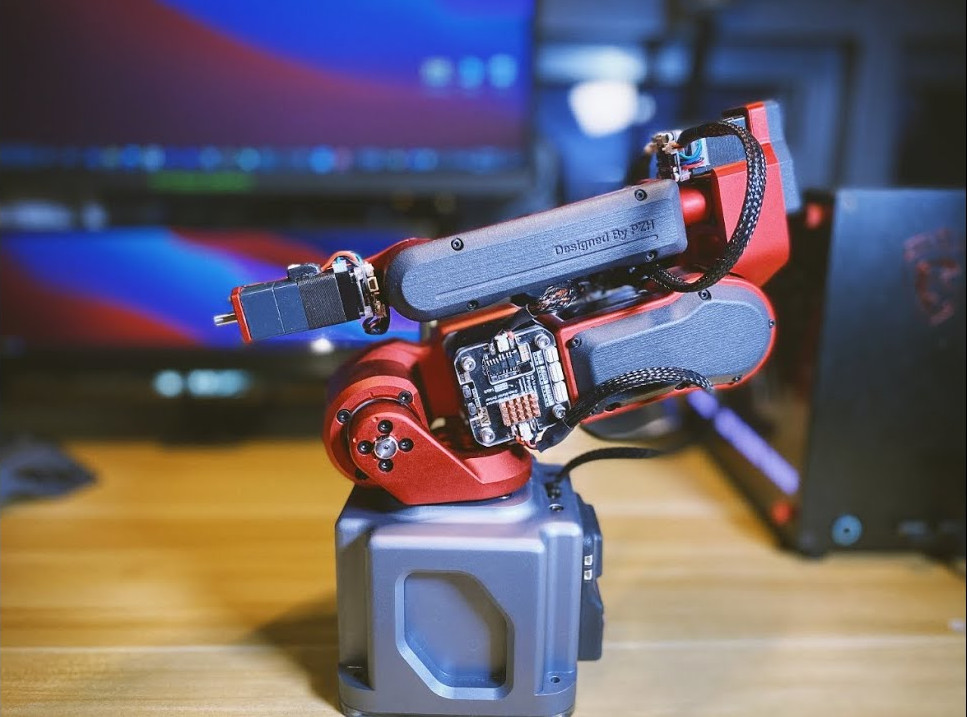 This year, I came across Zhuihui’s works, and I was amazed at the quality and scope of his work. The Dummy Robotic Arm shown above is a desktop-size arm with high repeatability for its size. As part of this work, Zhihui created a set of support tools for his invention.

Another work by the same author is the cute mini desktop robot with actuated head and arms. Similarly to the Dummy Robot, the robot comes with a software interface.

In September, Undefined Technologies released a video showing their ion ‘multirotor’ with no moving parts taking flight. According to the cited press release, the aircraft made a 4.5-minute battery-powered demonstrator flight. The company hopes to have a production-ready drone in 2024.

Drone interceptor with a net gun 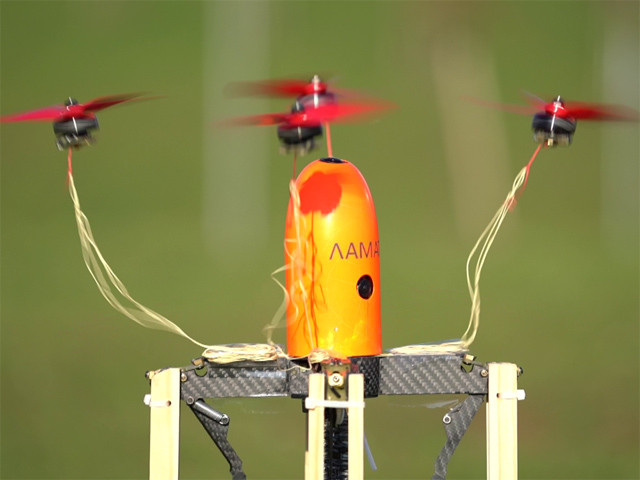 Drone Interceptor is a build by Aleksey Zaitsevsky. This multirotor has a kevlar net attached to the rotors, and when intercepting a rogue enemy, the motors detach from the frame and spread the net. 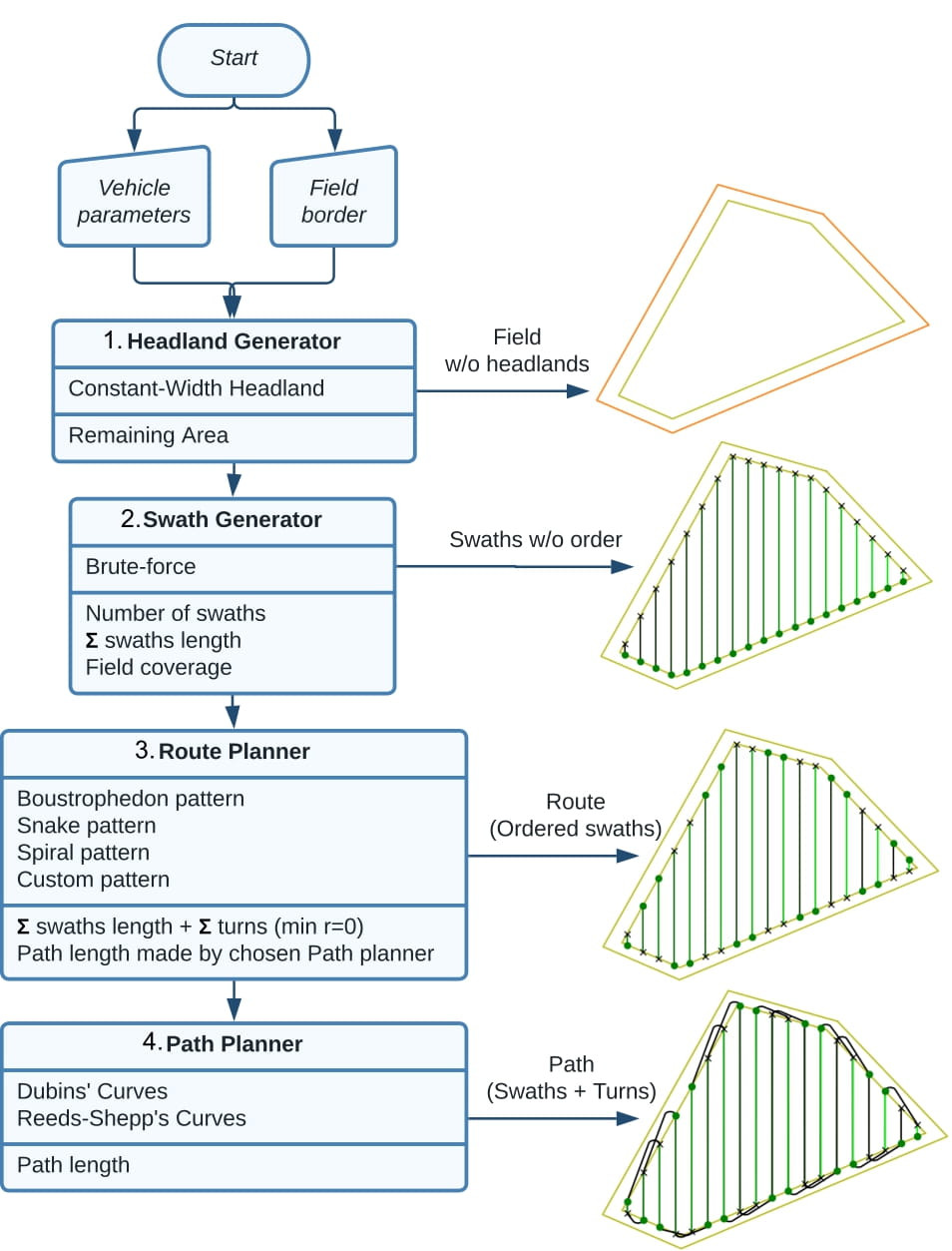 A super cool library for coverage path planning for convex fields. The library is handy for agricultural projects or building your robotic mower.

This library is a Python implementation of the Robotics Toolbox for Matlab. In the repository, you will find tools for representing the kinematics and dynamics of manipulators. You can even import a URDF description of a manipulator or use any of the 30 models provided by the library. In this repository, you will find the tutorials for Robotics Toolbox in the form of 12 Jupyter Notebooks.

“Quad-SDK is an open source, ROS-based full stack software framework for agile quadrupedal locomotion. The design of Quad-SDK is focused on the vertical integration of planning, control, estimation, communication, and development tools which enable agile quadrupedal locomotion in simulation and hardware with minimal user changes for multiple platforms”.

A Starship Robot vs. Train

You might want to turn off the sound for this video if you are in a public place. Someone’s lunch plans were derailed due to this incident. 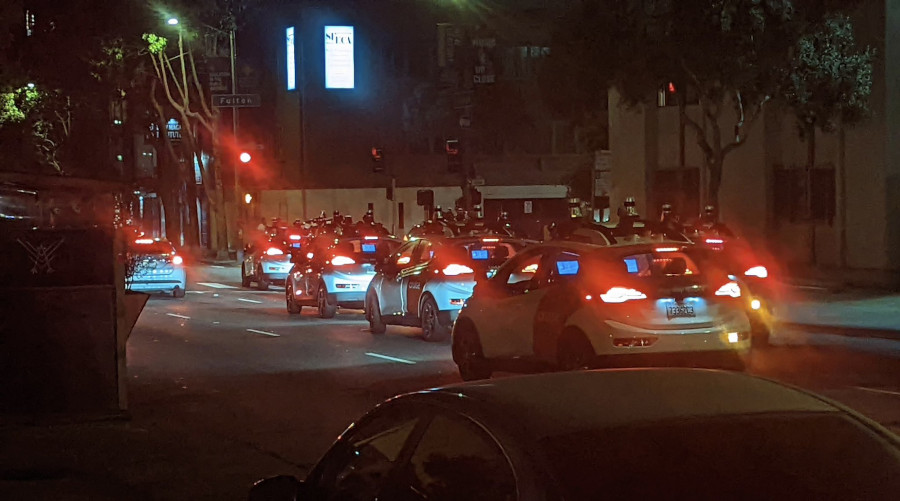 In June, some robotaxis in SF had a hiccup, and a couple of them clustered and blocked a road.

In September, a Wing delivery drone crash landed on 11kV powerlines, cutting power to 2,000 homes. The first responders said that the food was still hot when they arrived.

Some robots can’t handle losing, can they? This failure is an excellent example of choosing the wrong type of robot for a job and not considering the interaction with the end user.

In June, the animatronic Spiderman malfunctioned and crashed into a building. I recommend this video if you are interested in Disney’s stuntronic robots.

This open-access book by Damith Herath and David St-Onge is an introductory text providing a high-level overview of many aspects of robotics.

Anirudha Majumdar teaches this course at Princeton University. The course covers feedback control, motion planning, state estimation, and computer vision and uses a Crazyflie quadrotor throughout the course. On the above page, you will find all course materials.

“ROB 501: Mathematics for Robotics is a graduate-level course at the University of Michigan that introduces applied mathematics for robotics engineers.

My guiding principles after 20 years of programming

Alex Ewerlöf wrote an excellent article about his principles for working with software that I found could also apply to working on mechanical and electrical systems.

Their Bionic Eyes Are Now Obsolete and Unsupported

Second Sight was a developer of retinal implants that wound down in 2020, leaving many patients with non-functioning implants in their brains. This piece is a fascinating cautionary tale about corporate responsibility.

In December, Liam Drew, wrote the article titled Abandoned; The human cost of neurotechnology failure, where he looks into the problem of abandonware of neural tech.

These sculptures that double as working circuits by Mohit Bhoite are a joy to see. Few could be considered robots; however, I recommend checking them out.

Joe Barnard had finally realized his project of landing a model rocket Space-X style. In this two-hour (!!) video Joe goes through all the technical details of his build. By all the details, I mean it. We will learn about CAD, simulation, thrust control, reaction wheels, and more! I appreciate Joe putting this together, and from experience, I recommend this as a Sunday morning watch.

In August, we learned about Amazon wanting to acquire iRobot. Many weren’t thrilled by the idea, with US senators asking FTC to stop the deal and a UK Tech Watchdog demanding an antitrust investigation.

Huge news dropped in December about Intrinsic acquiring the commercial arm of Open Robotics. The acquisition is a massive change in the open-source robotics world that will hopefully start bearing fruit throughout next year.

The liDAR market is shrinking. The most significant announcement here was the proposed merger between Velodyne and Ouster. In December, Quanergy filed for bankruptcy, and shortly before that, we learned that MicroVision acquired Ibeo after it filed for insolvency.

Since it’s a yearly summary, it’s only appropriate to show some appreciation! In no particular order, I would like to thank:

Mat Sadowski is a robotics consultant and the author of the Weekly Robotics Newsletter. These days Mat is working with DTE, helping build industrial machines for liquid metal analysis.

The History of Turtle Robots»