The History of Turtle Robots

With the title of this article being “Turtle Robots”, you might be thinking to yourself, “Hmm, well I know about TurtleBots”, assuming you are into Robotics. Well, the infamous TurtleBots falls under the category of Turtle Robots, but that’s not all.

The idea of TurtleBot came from two roboticists, Tully Foote and Melonee Wise, when they were working at Willow Garage in 2010, interestingly, where the Robot Operating System (ROS) was developed. Behind every idea is a person trying to solve a problem. The problem with ROS at the time was that ROS only ran on big, fancy and expensive robots. When Melonee got her hands on Kinect and wired it with iRobot Create, that gave birth to the first generation TurtleBot. 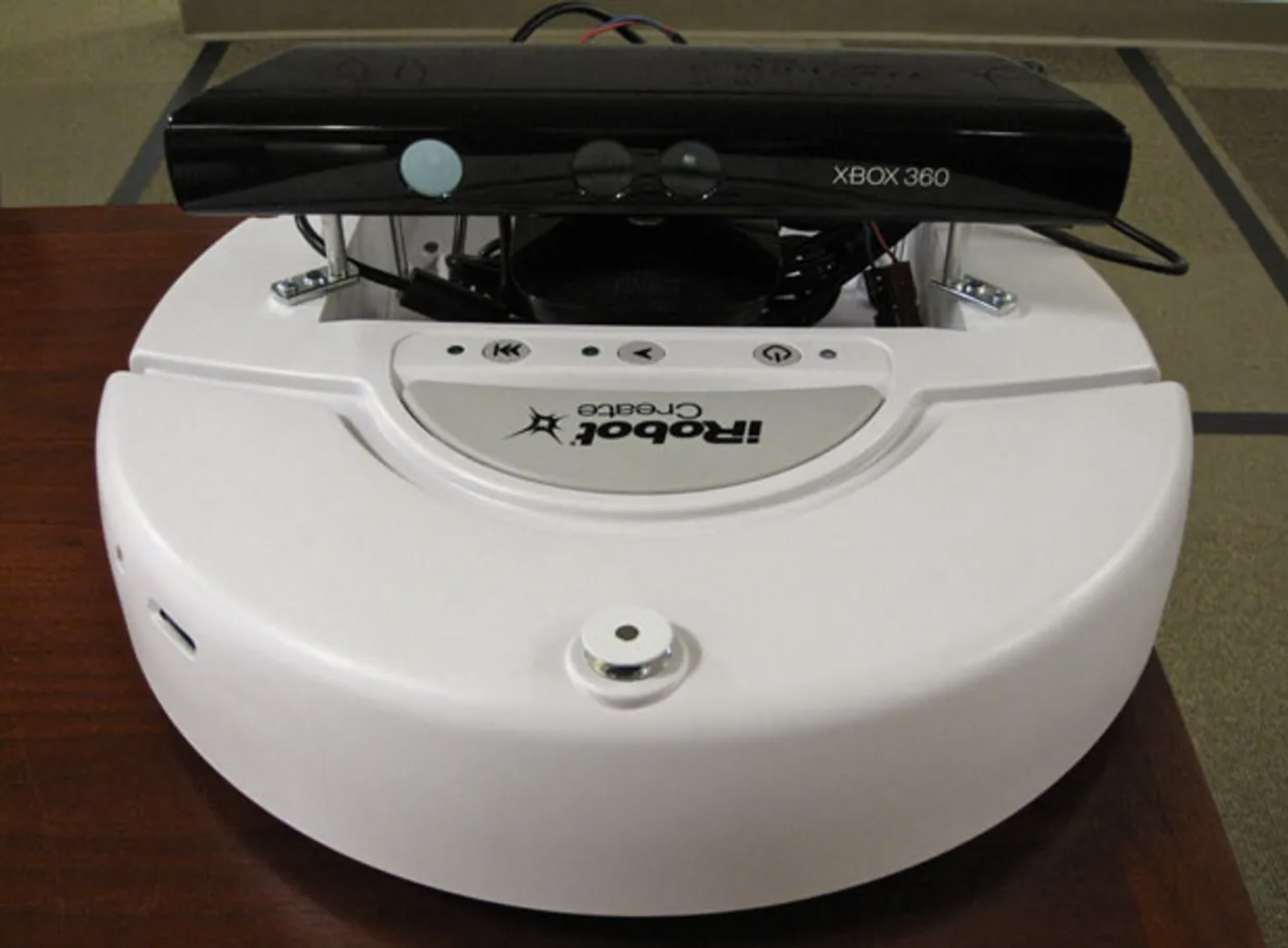 TurtleBot was a low-cost, personal robotic kit that had a completely open source SDK and can be used to build a robot that can drive around your house, as well as research SLAM or Path Planning algorithms. The possibilities were endless. No doubt, TurtleBot became a massive hit and was being used by about 15 universities to teach undergrad and graduate students.

The second generation TurtleBots, called TurtleBot2, consists of a Yujin Kobuki base, a 2,200mAh battery pack, a Kinect sensor, an Asus 1215N laptop with a dual core processor, fast charger, charging dock, and a hardware mounting kit attaching everything together and adding future sensors. It was released in October 2012, costing $1500.

The goal for third generation TurtleBots, called TurtleBot3, released in May 2017 in collaboration between Open Robotics and ROBOTIS, was to dramatically reduce the size of the platform and lower the price, without having to sacrifice its functionality and quality, while at the same time offering expandability. The latest generation of TurtleBots, called TurtleBot4, comes with ROS2 pre-installed and is developed by Clearpath Robotics. It is priced at $1195 and $1899. As new models of iRobot have been released over the years, interestingly, TurtleBot4 is equipped with iRobot Create3 mobile base.

The big question is why this small, affordable robot, primarily used for teaching robotics, was named with the word “turtle” in it. Well, as Melonee said in an interview, “Everything in ROS is turtles”. The TurtleBot actually came from Turtlesim and the intent behind Turtlesim was to teach ROS and ROS Packages. Turtlesim is a simulator where a turtle-like robot can be moved around and teleported to a particular location. Now, all the baby-boomers and early-millennials might find this all too familiar. Remember the Logo, an educational programming language widely known for turtle graphics? Actually, the turtlesim commands were inspired and similar to command structures as Logo Turtles. Logo was designed in 1967 by Wally Feurzeig, Seymour Papert, and Cynthia Solomon, but there were no physical turtle robots at that time.

In the late 1940s, a researcher named William Grey Walter worked on small, mobile robots, named Elmer and Elsie. These robots used analog circuits for thinking, were three-wheeled and had the ability to go to the charging station. The robots had a strong resemblance to Tortoises (or turtles) due to their shape and slow movement. Here is a sneak peak: Grey Walter’s tortoises

When Logo programming came, a researcher at MIT, named Marvin Minsky, took the design of a three-wheeled pen robot from Tom Callahan, and the rest was pretty much a DIY job, using a canister and a pen in the middle so that the robot could draw its path, as well as a “tail” for stability and undercarriage viewability. This robot was eventually known as a “Yellow Turtle” and was mainly used by children at school as a way of programming robots to draw or to explore an environment. 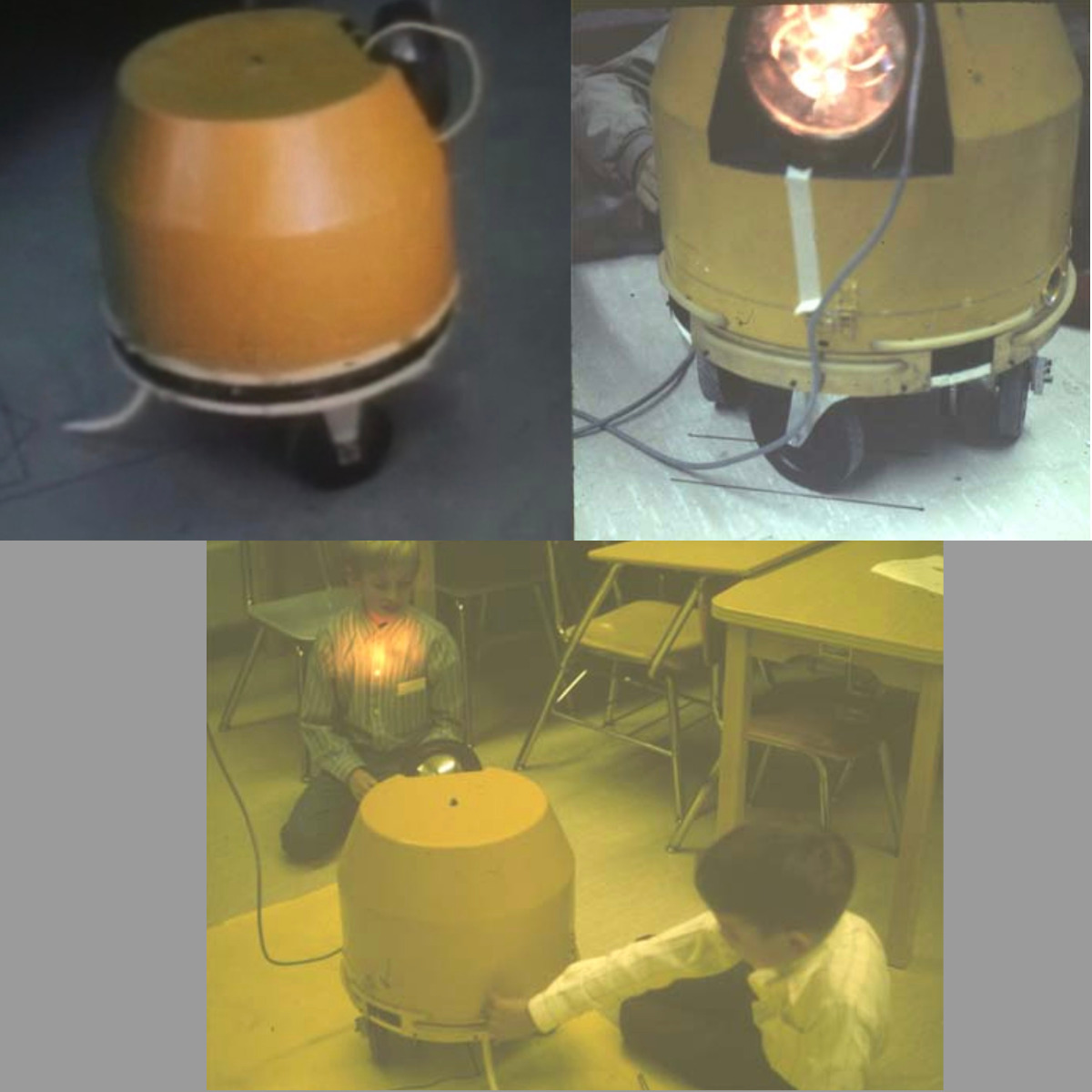 In 1971, Mike Peterson, who was a MIT Lab Consultant, introduced the first Logo-controlled turtle robot and is also the person credited to use the term “turtle”. This was just the beginning of the turtle robots. What followed was a series of new and better turtle robots. The very next year, turtle robots went commercial when Bolt, Beranek and Newman (BBN)’s Paul Wexelblat built the first wireless turtle robot named “Irving”. In 1974-76, Radia Perlman created a turtle robot that could be controlled with a “button box”. 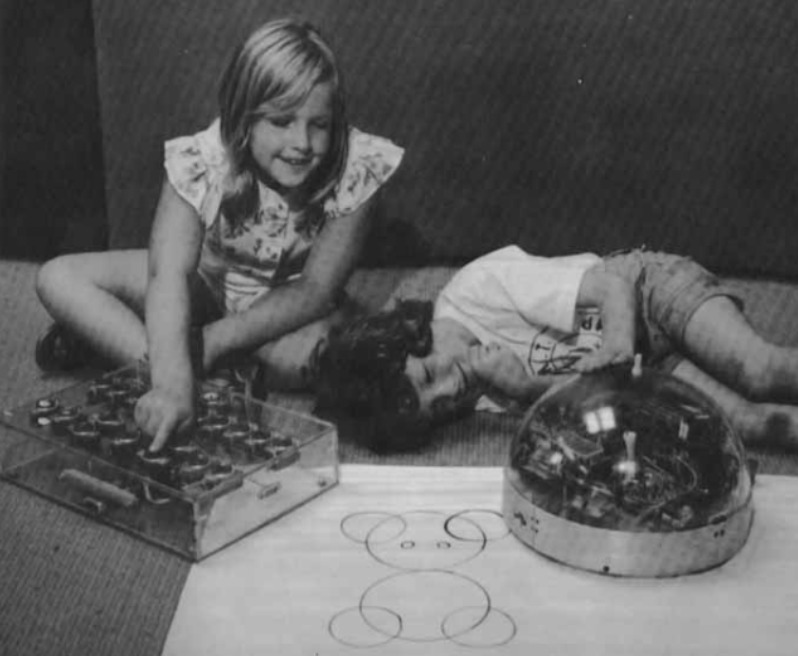 The question was how long sci-fi could have stayed away from the impact of these turtle robots. The answer was not for long, as the first Star Wars film came out in 1977 and some people say that the small black MSE-6 mouse droid was definitely influenced by turtle robots.

From 1988 to 2011, Valiant Technology, a company I could find on LinkedIn, built the Valiant Turtle Robot, which could be connected to an Apple IIe computer and could be programmed in Logo. This robot was mostly used in schools for teaching coding to kids. The Valiant Turtle had a pen in the center with an up/down mechanism and could draw any pattern on paper. 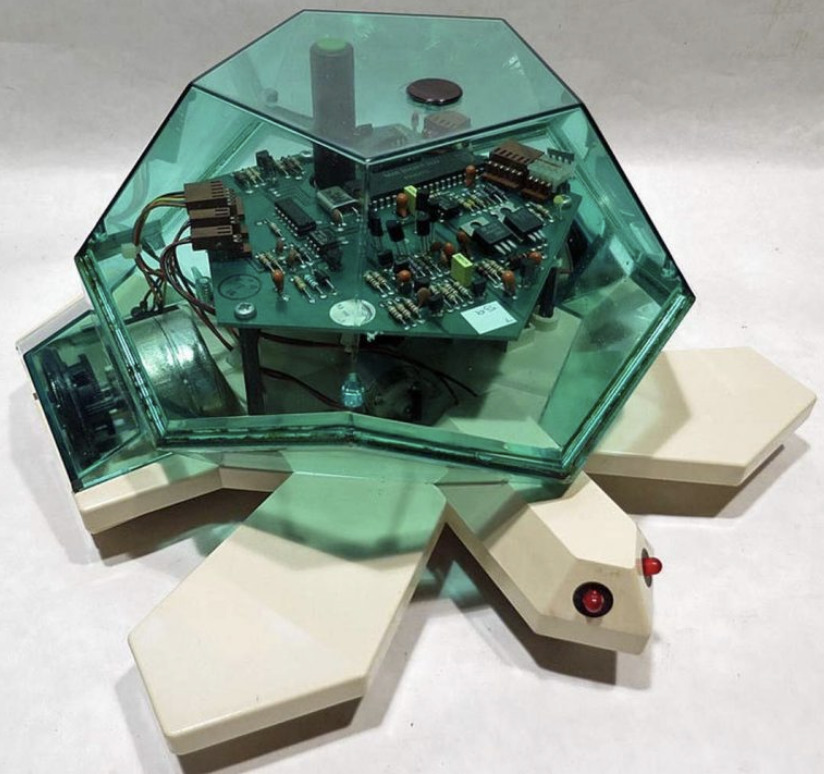 Recently, when I talked to my 7-year old nephew, who knows I am a Roboticist, he couldn’t stop himself from talking about his Lego robotics kit. Lego isn’t as new to the game as one might think. In 1998, Papert (Logo’s founder) collaborated with Lego and the result was the Lego Mindstorms series of robotics kits priced at $199, which would be about $400 in 2023. Certainly, at some point, someone had to cross the Atlantic and so turtle robots went international. Denning International was a Boston-based turtle robots company, but was the trading name for the private Australian company, Branch & Associates Pty Ltd, (B&A) although Denning International got some bad press in its day. 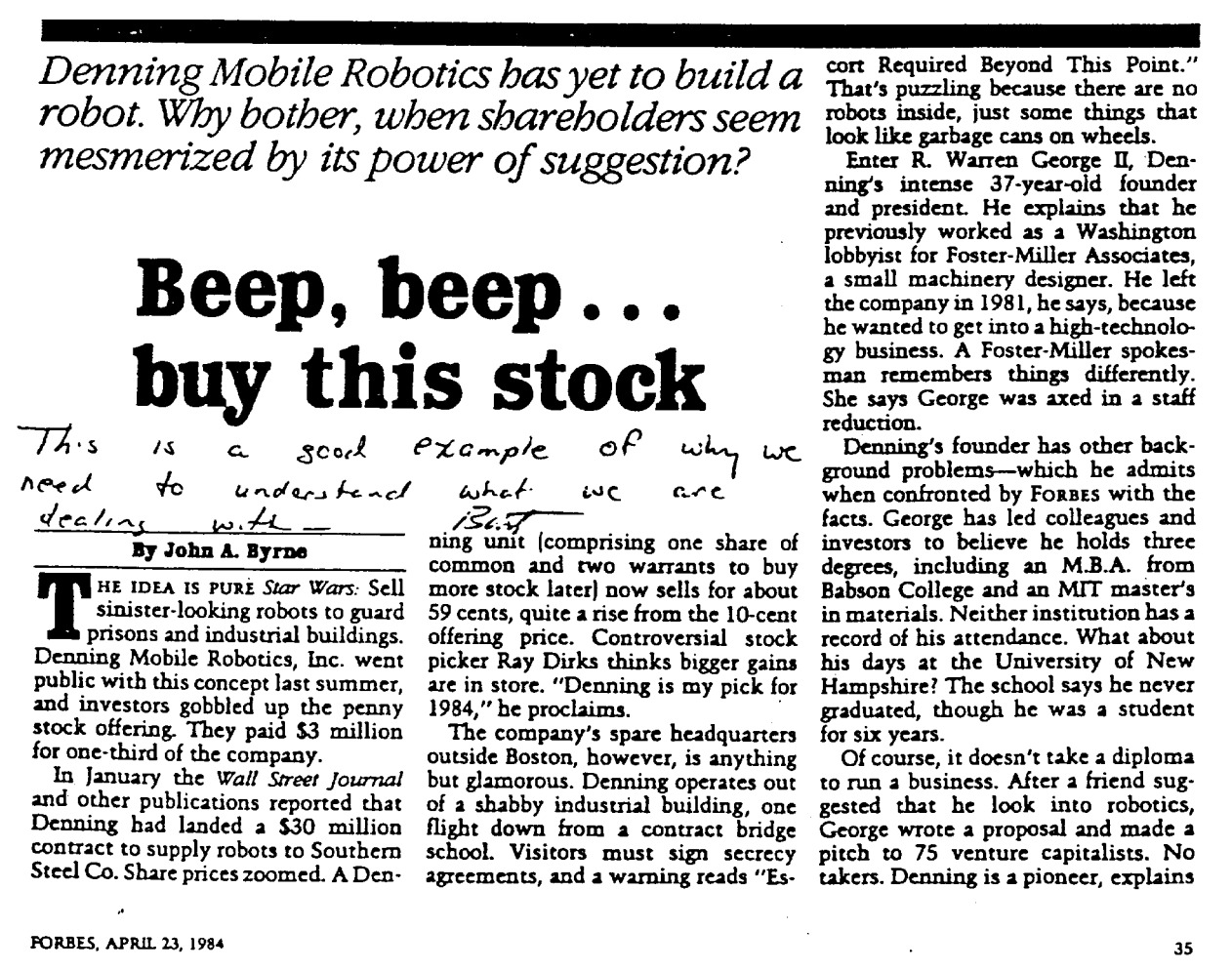 Image Source: If Our Robots Are So Smart, Why Aren’t We All Rich?

The other robots launched in this period were ‘Turtle Tot Robot’ By Flexible Systems, ‘Tasman Turtle’ and ‘Terrapin Turtle’ Robot by Terrapin Inc.

There were also some cool advertisements in the past. 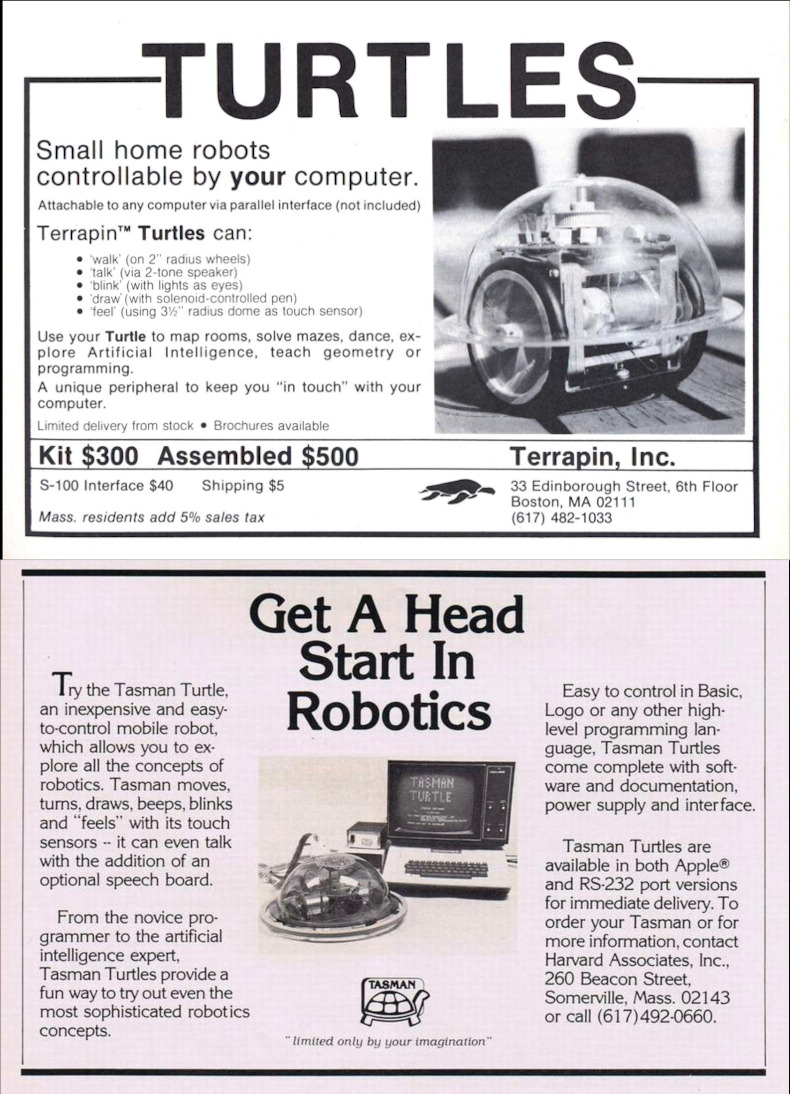 Even today, people are using the concept of turtle robots. Some of them are fighting in robot wars and built a turtle robot, calling them Terror Turtles, for not just one, but at least for four series.

There exists instructables, like Open Source Turtle Robot, and even Arduino-based robot turtle kits and Lego Robotics kits are still part of early STEM education.Nonetheless, robots and turtles are very much intertwined. For over 80 years, the underlying thought process for the turtle robots has been the same, an open source, free-to-build-on platform, to teach, and give access to children to learn robotics.

As for the next generation TurtleBots, I think it is time to take them outdoors, on the sidewalks, in the urban environment. The space of indoor robotics has had massive development in the last decade and today, it is a relatively easier problem to solve. Whereas the robots for curbside, or last-mile delivery, even self-driving cars, are still facing major challenges, especially during extreme weather conditions and drastically dynamic environments with new edge cases and poor sensor readings. We are secretly waiting for the TurtleBots 5.0 to chill at the Campus Quads with its 3D Lidar and perhaps GPS.

« Robotics in 2022 - the most interesting applications, research and DIY projects