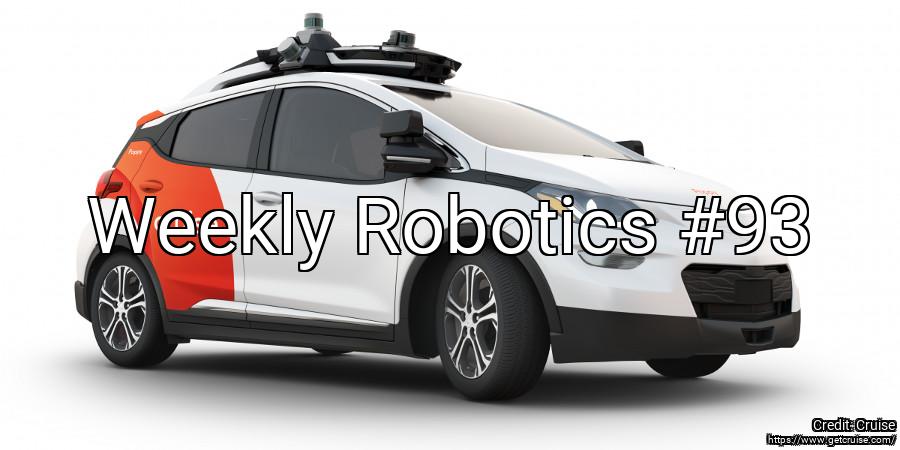 Jordan, one of the readers has won AWS JPL Open Source Rover Competition (featured in the issue 68). Congrats! If you happen to be hiring bright minds then you know what to do! The most clicked last week was the Weekly Robotics YouTube channel with 13.8% opens.

1) Rethinking Cruise’s AV Development Loop During COVID-19.
Medium
INFO: Here is yet another interesting blog post from Cruise. This time Tom Boyd discusses how using simulation is useful in Cruise’s workflow, especially when they can’t deploy their cars due to a pandemic. I didn’t realize how important Magic Tire Formula was for realistic simulations - if you’d like to learn more about it then I found racer.nl description very good!

2) [Hello World!] - Simulation.
StreetDrone
INFO: While we are on the subject of autonomous cars and simulation: StreetDrone has released their robotics Renault Twizy Gazebo simulation setup. Twizy is a lightweight electric car, making it autonomous is a very interesting idea, especially that they are relatively cheap. I’ll be definitely looking out for more news about StreetDrone’s progress on these cars.

3) ros-ydlidar-x4-docker.
GitHub
INFO: Patrick, one of the readers of Weekly Robotics, had created a repository with a docker image of ydlidar ROS driver. This repo can be a good starter if you are looking to use docker with ROS.

4) Spherical Quadruped Arduino Robot.
Instructables
INFO: This instructable contains instructions and a gallery of a spherical quadruped robot that you can build yourself. Each leg of this quadruped is controlled by 2 servos, bringing the total amount of servos used to 10 (there is one servo used for head movement and one used for doors). This build looks like a good weekend project!

6) Mech Suit Field Trials - Episode 1 - Giant Mech Crushes a Car.
YouTube
INFO: If you liked the story of MegaBots that I’ve featured last week then you might like this giant mech “prosthesis” from Furrion Exo-Bionics. There are not many details on this robot but it weighs 8k lbs (~3.5k kg) and it seems to be powered by LiOn battery packs. Big thanks to Julius for the information about this video!

7) CPP Optimizations Diary.
CPP Optimizations INFO: Davide Faconti, an author of such packages as PlotJuggler (seriously if you ever have to plot any ROS or PX4 data look no further, this is the best graphing tool I’ve ever used) and BehaviorTree.CPP, had created a blog with examples of C++ code optimizations. Definitely worth checking out if you happen to be writing code for robots!

8) Publication of the Week - OmniTact - A Multi-Directional High-Resolution Touch Sensor (2020).
UC Berkeley
INFO: Researchers from UC Berkeley are developing an optical tactile sensor that uses 5 micro cameras to observe deformation of a gel skin coating in multiple directions. Since the cameras used provide a resolution of 400x400 pixels the resulting images seem to be very detailed and a 360° horizontal and 270° vertical field of view should provide good feedback all around the sensor. You can see a 10 minute video that nicely summarizes the paper on YouTube.