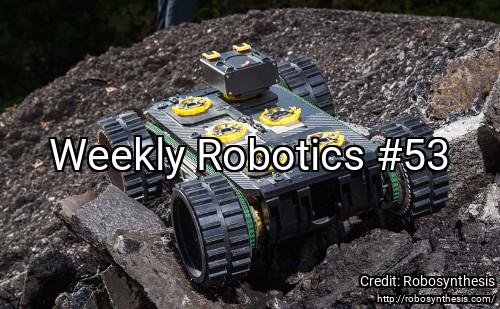 1) ArduRover Boat Uses Tupperware To Float.
Hackaday
INFO: Very interesting project utilizing ArduRover (an ArduPilot project). As you can guess the author of the project used a tupperware as a base platform for a boat. The tupperware used works surprisingly well for it shape and I recommend to watch the 18 minutes video featured in the article.

2) A Cave Is No Place for Humans, So DARPA Is Sending In the Robots.
Popular Mechanics
INFO: The first circuit of DARPA Subterranean Challenge (we’ve mentioned it in the 2nd issue of Weekly Robotics) took place from August 15th-22nd. The above post is a good article that sums up the challenge. The winner of this event was the Explorer team from Carnegie Mellon University and Oregon State University. While on the topic, I highly recommend taking a look at this IEEE Spectrum article showing how the teams approached inevitable communication issues. On DARPATV YouTube channel you will find lots of interesting videos about the challenge, including circuit presentation, videos from the participating teams and more.

3) Louise Poubel on the Robot Operating System.
InfoQ
INFO: Big thanks to Artur for sending me this podcast episode in which Wesley Reisz interviews Louise Poubel from Open Robotics. In the podcast you can learn interesting insights on ROS2, Ignition simulation and robot development. The biggest takeaway for me from this podcast was that in the future Gazebo simulator will be retired in favour of Ignition Robotics.

4) Russian Humanoid Robot to Pilot Soyuz Capsule to ISS This Week.
IEEE Spectrum
INFO: This article briefly describes Skybot F-850, a humanoid robot that was launched to ISS onboard Soyuz MS-14 last Thursday. The robot was meant to describe pre-launch preparations and report report flight parameters pos-launch. After arrival to ISS it’s meant to be used for a week to perform several tasks that are not public at this point. On Saturday the Soyuz docking procedure was aborted due to rendezvous system malfunction. According to Roscosmos tweet a next automatic docking attempt will take place on Tuesday (27th of August).

5) YAK: 3D Reconstruction in ROS2.
ROS Industrial
INFO: This article presents the work on Yak (Yet Another KinectFusion), a set of libraries that can be used for volume representation of parts in ROS. The library is licenced under MIT licence and you can find it on GitHub.

6) Can Rocket Lab Really Catch a Rocket With a Helicopter?!.
Everyday Astronaut
INFO: I found this piece by Tim Dodd to be a very good read about the different methods of rocket recovery and their feasibility. Thanks Tim for a solid lesson on space flight!

7) Publication of the Week - MuSHR: A Low-Cost, Open-Source Robotic Racecar for Education and Research (2019).
arXiv
INFO: Via website: “The Multi-agent System for non-Holonomic Racing (MuSHR) is an open-source robotic hardware and software platform for learning and researching AI in a setting of autonomous vehicles and mobile robotics”. The platform is based on off-the shelf R/C car and components and has been built in Personal RoboticsLab at the University of Washington’s Paul G. Allen Schoolof Computer Science & Engineering. In the BOM we will find such items as: IntelRealsense D435i, YDLIDAR X4 (you can find my review of this sensor on my blog), VESC, Nvidia Jetson Nano and Vex Robotics Bumper Switch.The full platform built together with an RGBD sensor should cost around $900 (sensorless version should cost about $600). For more information about the project check out project repository.

2) DreamVu (Hyderabad, India) - Various Positions.
INFO: At DreamVu we are building a unified omni-stereo camera platform for disrupting high value machine vision and human vision markets. Our motto is to Capture Reality like Never Before.