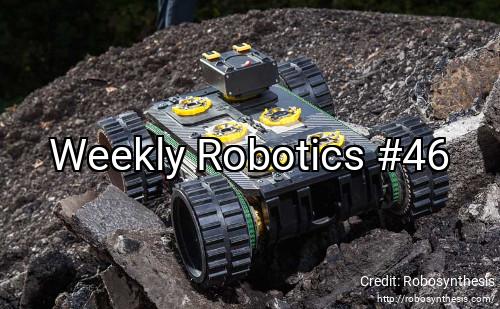 Weekly Robotics Q2 2019 report is available! The short story is the newsletter is growing and as I’m writing this we are at 993 e-mail subscribers. Enjoy the read!

1) NASA’s Dragonfly Will Fly Around Titan Looking for Origins, Signs of Life .
NASA
INFO: In 2026 NASA will launch Dragonfly mission and it will take the mission 8 years to arrive on Titan. Dragonfly will be the first multirotor flown by NASA on an extraterrestrial body. The aircraft itself will be a coaxial octorotor (it has 4 arms, each hosting 2 propellers), will weigh 450 kg (990 lbs) and will be powered by RTG (Radioisotope Thermoelectric Generator). The baseline mission is planned to last 2.7 years. We will cover Dragonfly in detail in the publication of the week section of the issue #47.

2) RoboCup 2019.
RoboCup
INFO: Today RoboCup 2019 is wrapping up (next time we will inform you way in advance!). RoboCup is an annual robotics competition with various leagues that’s mostly known from the Robot Soccer League. The official goal of RoboCup project is: “By the middle of the 21st century, a team of fully autonomous humanoid robot soccer players shall win a soccer game, complying with the official rules of FIFA, against the winner of the most recent World Cup”. Although the event is most likely finished now you can still view the official livestreams and as pointed out by Lutz the streams provided by Nao Devils seem to be particularly good.

3) ‘Boaty McBoatface’ shows promising future of AUVs.
The Robot Report
INFO: Boaty McBoatface (if you’ve missed the origin of it’s name then Wikipedia has you covered) traversed more than 180 km (112 mi) autonomously at depths of up to 4 km (2.5 mi). During the mission Boaty measured the temperature, saltiness and turbulence of the water at the bottom of the ocean in order to map better the effects of global warming on the rise of sea levels. You can read about the mission on the University of Southampton website. We also recommend reading the article on Robot Report as it gives quite a nice overview of the Autonomous Underwater Vehicle market.

5) First-ever Successful Mind-controlled Robotic Arm Without Brain Implants.
ScienceDaily
INFO: Researchers from Carnegie Mellon University managed to use a non-invasive brain-computer interface (BCI) to allow humans to make a robot arm follow a cursor on a screen. The team plans to conduct clinical trials in the near future. You can see the video of the robot in action on YouTube.

6) Study: Social Robots Can Benefit Hospitalized Children.
MIT
INFO: Researchers from MIT Media Lab, Boston Children’s Hospital and Northeastern University did a study on the effects of using Huggable, an animatronic teddy bear with hospitalized children. During the trials the robot was remotely operated by a specialist that could move Huggable’s body actions, gaze and facial expressions as well as speak to the microphone to have their voice transformed into the bear’s voice. In the future the researchers hope to make the robot autonomous.

8) Publication of the Week - Engineering a Safer World: Systems Thinking Applied to Safety (2011).
MIT Press
INFO: This Open Access book by Nancy G. Leveson is offers a view on new approaches to safety engineering. The book contains many examples of safety failures and although I still didn’t finish it I can highly recommend it. Since the book is open access you can download it as a PDF or buy it from any source listed on the site.

Big thanks to Lutz for sending us the information about RoboCup! If you know of something that we should cover then feel free to contact Mat.

1) ROS Web Tutorial Part 2 - Working With Cameras.
msadowski.github.io
INFO: In this intermediate tutorial I’m showing how to use ROS with UVC enabled USB cameras and a computer running Ubuntu. There will be one more tutorial in the series about using web video server.